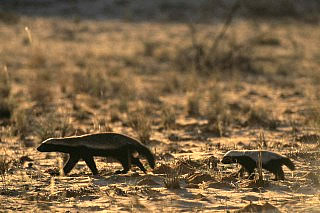 On that particular morning the air was crisp and cool, and the kudus sheltering under the trees welcomed the warmth of the rising sun. They were perfectly camouflaged in the shadows and before stepping out into the sunshine their ears listened for any threatening sounds and their noses searched the breeze for the scent of predators.

All was clear but still they walked cautiously, their delicate legs brushing the dew from the tall grass.

They had no idea that a pair of dark eyes was watching them intently, ready to drive them away if they came any closer to the den.

Those were not the eyes of a lion or a leopard, but of a smaller predator, every bit as fierce and far more courageous.

This was a mother 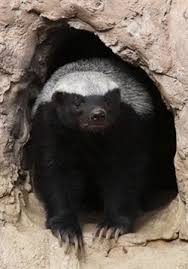 badger, Sasha, protecting her cubs, safely hidden in the dark, warm burrow behind her. She was strong and muscular and she was ready to attack anything that threatened her young, even a kudu twenty times her size.

Today though the kudu walked on a down to the valley and she could busy herself with her daily task, that of finding food for her family.

She raised her head to sniff the wind and as she did so a most welcome visitor came into view. Nyachi the honey guide bird flew down towards her and began his exciting and imploring chatter and twitter.

He flapped around her head making sure that he had her attention and then flew towards the forest nearby. The badger followed him eagerly, knowing that he was leading her to a wonderful stash of honey.

Her heavy, stocky body crashed through the grass and shrubs and frightened a timid steenbok nearby. 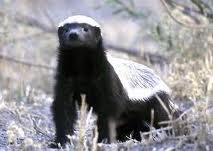 Before long Nyachi flew to a tree with a hollow in the fork and twittered even more excitedly. Sasha noticed the large swarm of bees buzzing around the entrance.

Without a moment’s hesitation, she began to climb up to the hive, using her long sharp claws. The bees noticed her and immediately began to attack this intruder.

Most tried to sting her body but found her fur too thick, a good number attacked her nose which was unprotected and she shook her head and swatted them with one paw every time she was stung.

She didn’t seem to mind the pain and her nose began to swell. She had one thing on her mind – delicious honey and she climbed on undaunted.

Right there she started eating greedily and her whole face was a sticky mess. Nyachi twittered anxiously because she hadn’t given him a share yet, but she continued to feed herself, oblivious. Eventually she dropped a piece to the ground and he fluttered down quickly and ate his share! 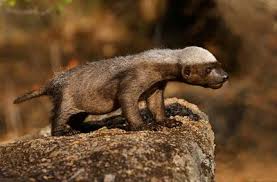 When Sasha could eat no more she scooped out another chunk of the comb and carefully made her way down the tree. What a funny sight w=she was with her swollen nose and sticky fur!

She hurried back to the den with the honeycomb in her mouth. She was almost there when she suddenly froze in terror.

Lying close by was a very long and very thick black mamba – a fierce and feisty venomous snake – with his tongue flicking in and out of his mouth and his eyes fixed on Sasha!

She knew she had to move quickly. 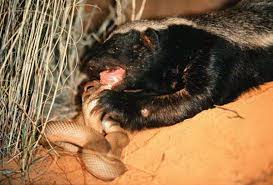 She dropped the honey and crept backwards slowly, getting herself into a position where she could attack the huge snake.

As she did so, the mamba suddenly raised its head and lunged at her. Sasha dodged quickly and the sharp fangs missed her. The snake recoiled and was ready to strike again.

This time, Sasha was ready. She dodged out of the way as his head thumped down next to her and in an instant she sprang towards him and sank her sharp teeth into his spine just behind his head.

For a good while the snake thrashed about but Sasha did not let go until he lay still and she was sure he was dead.

Then she dragged his body into the den for her babies to feed on and a short while later she fetched the honey to complete the feast.

What contented, happy badgers they all were that day, but Sasha’s mind was on what she would hunt for them the next days…