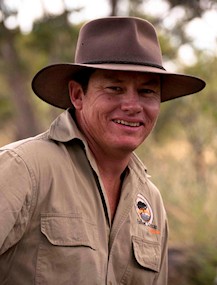 Terry, born in Mutare, Zimbabwe, spent his childhood in Gweru – a small town right in the middle of the country. His father was an avid fisherman and taught his boys from a young age the value of nature and how to survive in the bush. After leaving school he was afforded an apprenticeship with a prominent operator and tourism visionary who inspired Terry to progress a career in guiding.

Sometimes controversial, it was during this apprenticeship that Terry forged a great interest in elephant and began the first-ever elephant swims in the country.

His career comprises more than 15 years as professional guide as well as management of various leading safari camps throughout the country. Shortly after he was married in a beautiful bush ceremony in 2007 during his employment as manager of Somalisa camp in Hwange National Park, he was offered the opportunity to start his own safari business and in 2008 he launched the luxury mobile tented & walking safari operation that is now Forever African Safaris.

Terry has a deep love of Zimbabwe and is passionate about preserving it as a premier safari destination. It is his great joy to share this bush life with his guests and afford them their own true African adventure in his beautiful country.